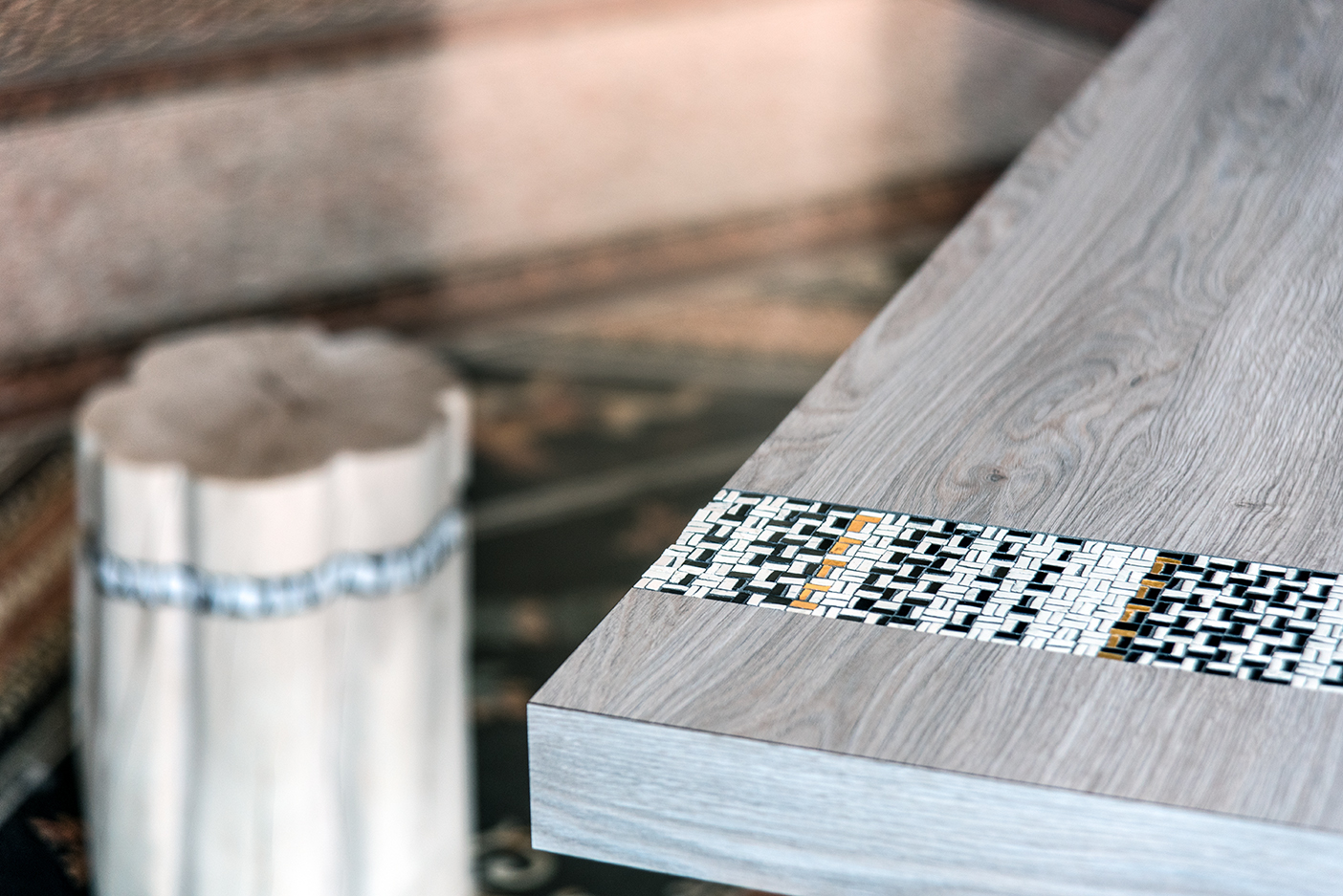 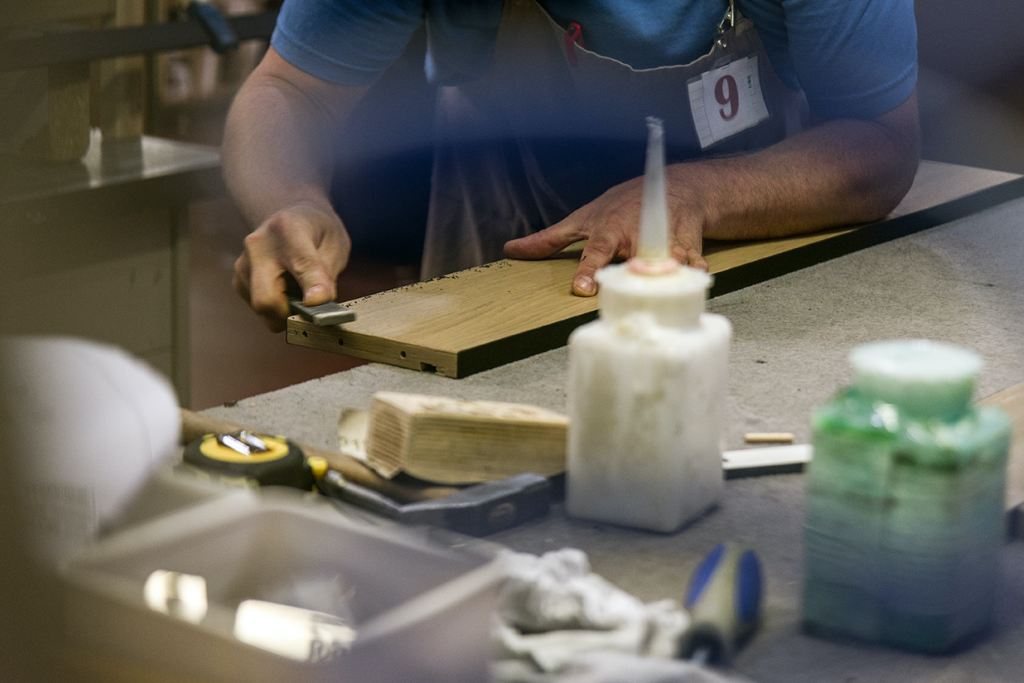 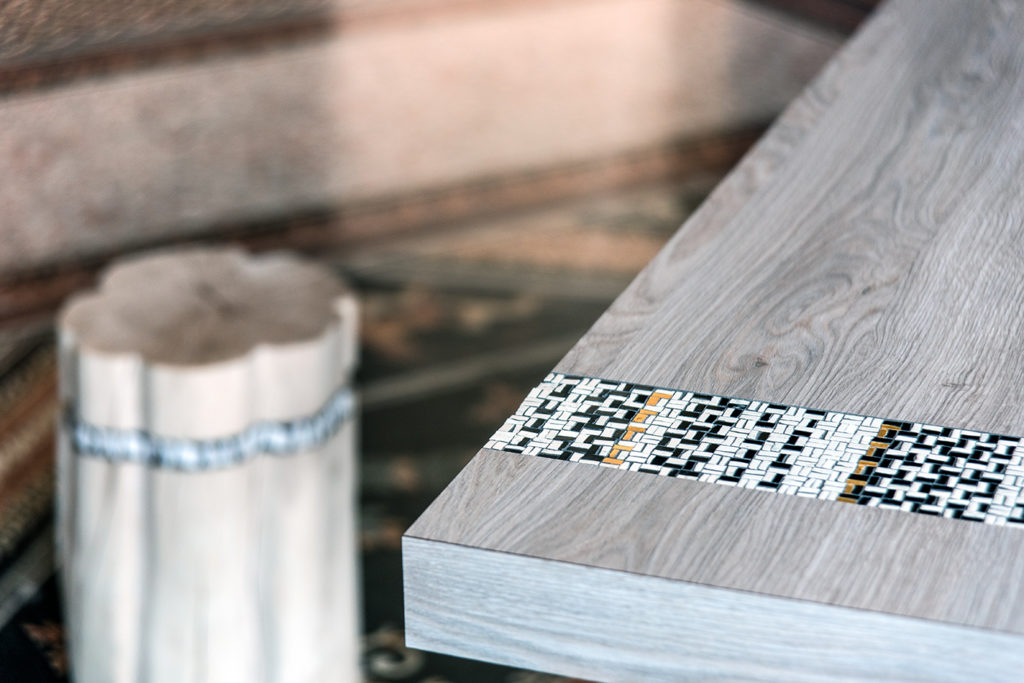 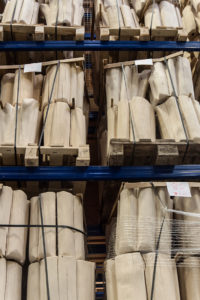 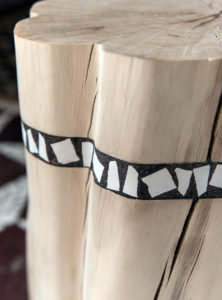 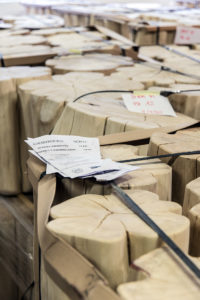 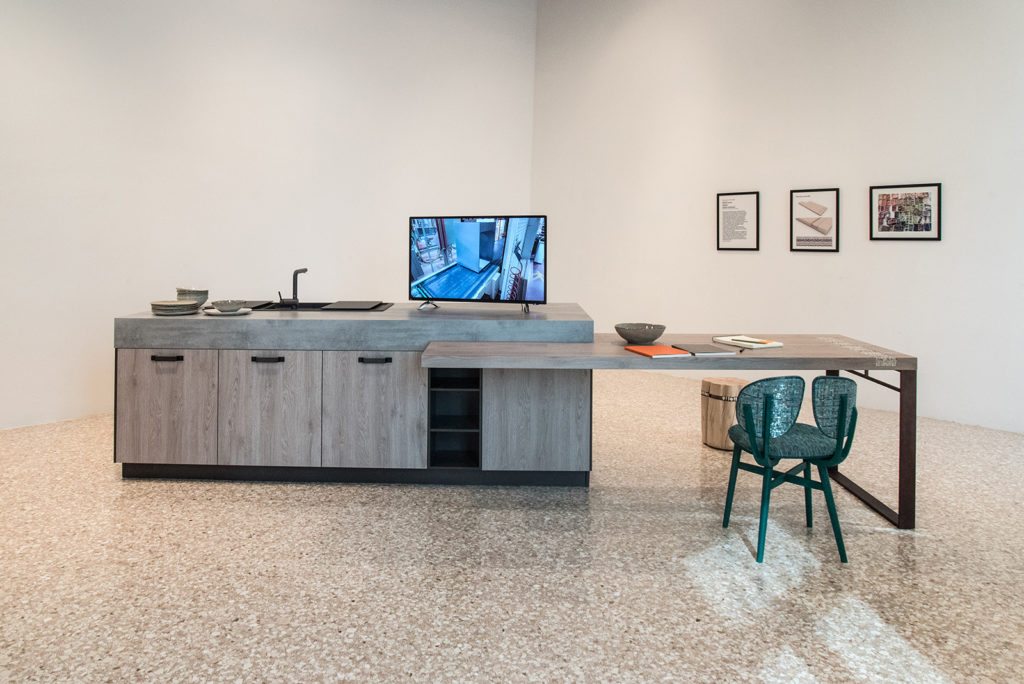 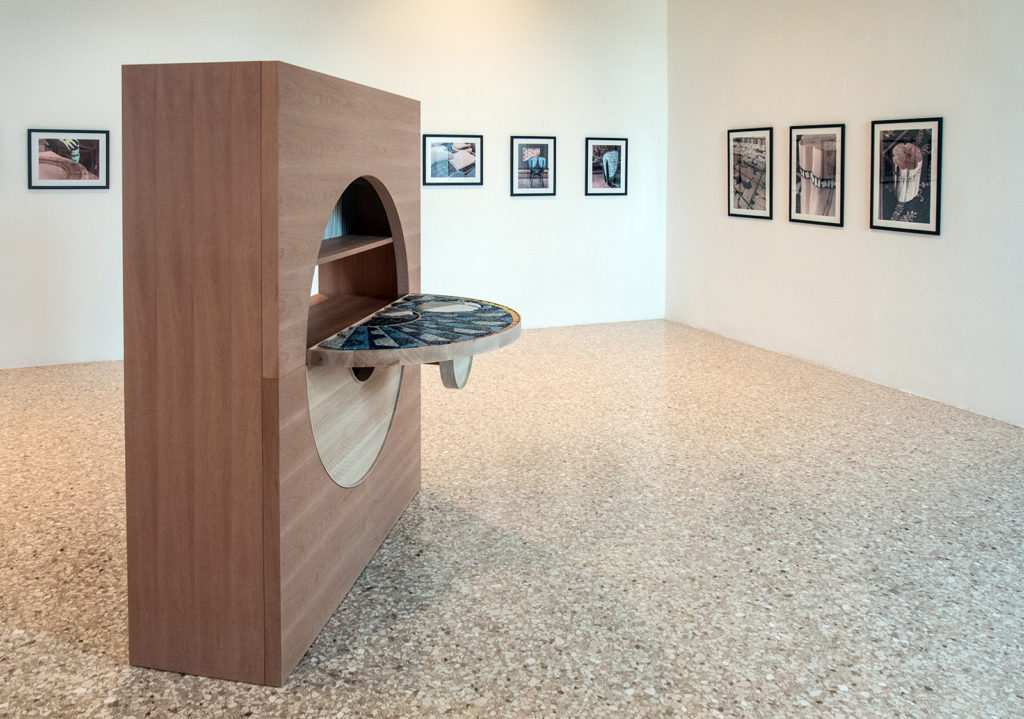 CREAttivo, a project in between art and enterprise for new mosaic scenarios. A conversation with the curator Sabrina Zannier, a tireless professional in the constant search for new creative languages and new ways of enjoying all things contemporary in its broadest sense.

Æ — How was the CREAttivo project born?

SZ — The interest and commitment to new horizons in the relationship between art and business date back to 2009, when I included an exhibition as part of the Maravee Festival entitled “Arte/Impresa/Territorio” (Art / Business / Territory). In the large rooms of the Castle of Colloredo di Monte Albano project-sharing between art and business was set up as an important way of cultural, social and economic innovation.The set-up presented each company with a collaboration with one or more artists and designers, expressed through the production of objects, videos or photographs: Illy with Adam Kalkin; Molteni & C with Anna Galiena; Moroso with Michael Lin and Alessandro Paderni; Anna Rachele with Olivo Barbieri, Moreno Gentili and Massimo Vitali; Snaidero with Comuzzi, Pininfarina, Gae Aulenti, Mangiarotti..; Valcucine with Gabriele Centazzo, Enrico Zanetti, Umberto Giolli…

With Sinetica Industries I then developed the following example of a project – “Sinetica for Art” – which sees a company as a cultural promoter,not merely a sponsor but a producer of ideas and events related to its philosophy, in this case devoted to an open view of the world. We produced two volumes by the photographers Olivo Barbieri and Malik Sidibé published in the Photography Series by the publisher SKIRA. There was an exhibition for Barbieri and a prestigious event for Sidibé at the Claudio Buziol Foundation in Venice, the latter thanks to the valuable collaboration of the AtemporaryStudio.

From these two experiences the idea of CREAttivo was born, indicating a further step in the relationship between art and business. Because this project was conceived as a work in progress it has now moved on from a competition of ideas for including a mosaic design as part of furnishing accessories, to the production of the accessories themselves and thus to the creation of the mosaics. 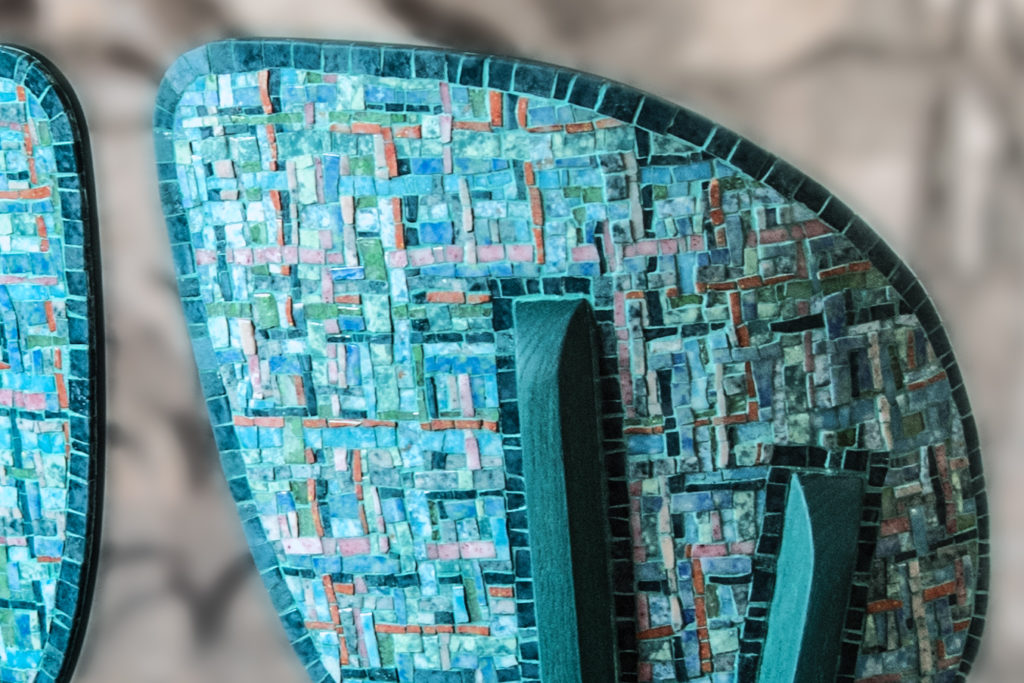 Æ — Why the involvement of the Friuli Venezia Giulia Mosaic School?

SZ — For two reasons. The first was dictated by the desire to bring mosaic art into the field of design as a sign of the artistic customization of an industrial product; the second reason, to respond to the aim of the project, that of creating synergies between art and business beginning with the teaching of art, and thus staging a work in progress with a broad social scope. Both motives led me to the Friuli Mosaic School, recognized throughout the world as a centre of excellence in our region. Æ — Do you think this project could mark a new course for mosaic?

SZ — Mosaic art in general and the Friuli Mosaic School in particular, has already thought about collaborative experiences in the field of design, but in most cases they flowed into the production of unique pieces or a few specimens destined for the art world. One of the challenges of CREAttivo – already highlighted in the announcement of the “Mosaic & Design” competition – was to put forward a sustainable mosaic presence within industrialised processes: minimal but visually and conceptually incisive, capable of responding to short lead times. CREAttivo does not claim to set a new course for mosaic, but the hope of being able to indicate sustainable ways for mosaic production within businesses and for industrial manufacturing of artistic merit. With the ultimate aim of promoting and disseminating aesthetics and cultural values into everyday life. 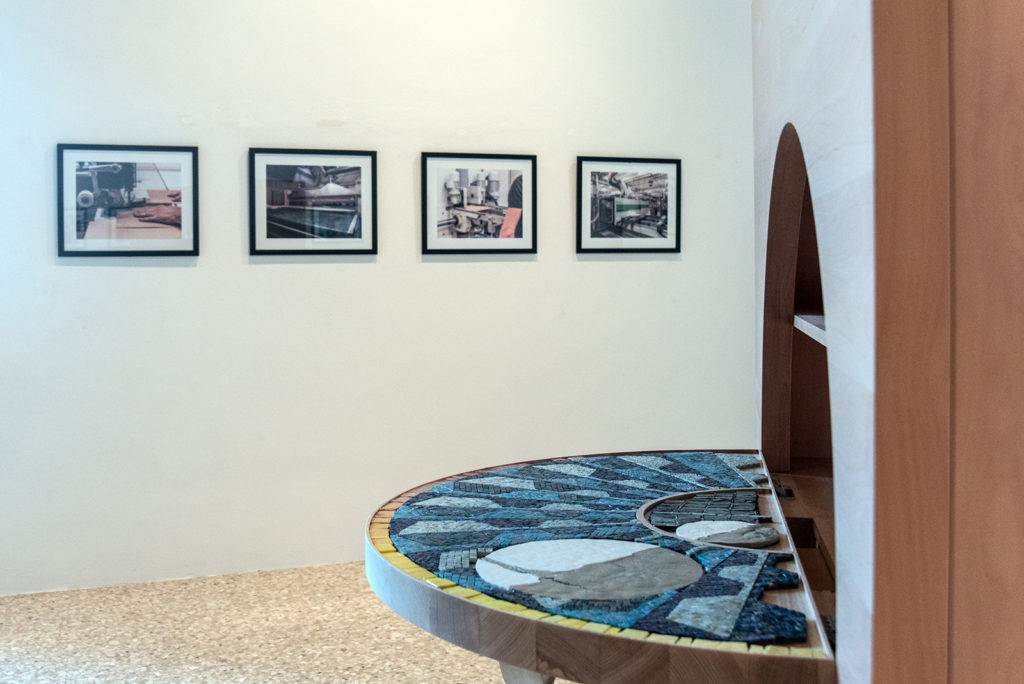 Æ — Will the pieces go into production or into the catalogue as “bespoke” pieces?

SZ — The project will be posted on the companies’ websites, making the related furnishing accessory available as a “bespoke” piece. Whether any actual production will come out of this stage will depend on the individual companies. By stimulating the value of culture and teaching, CREAttivo has created the conditions for a new horizon, but any future developments will depend on the connections that have been created. Absolutely positive, because since the meeting of the jury for the competition of ideas the company managers have begun a conversation with the Friuli Mosaic School, which then resulted in an actual activity, with some ideas for the future. If the prototypes generated by CREAttivo go into production I will be very happy, but equally so if, starting from CREAttivo other autonomous co-operative projects between the mosaic and industrial fields come into existence. The task of culture is to sow, regardless of who will be harvesting the fruits. 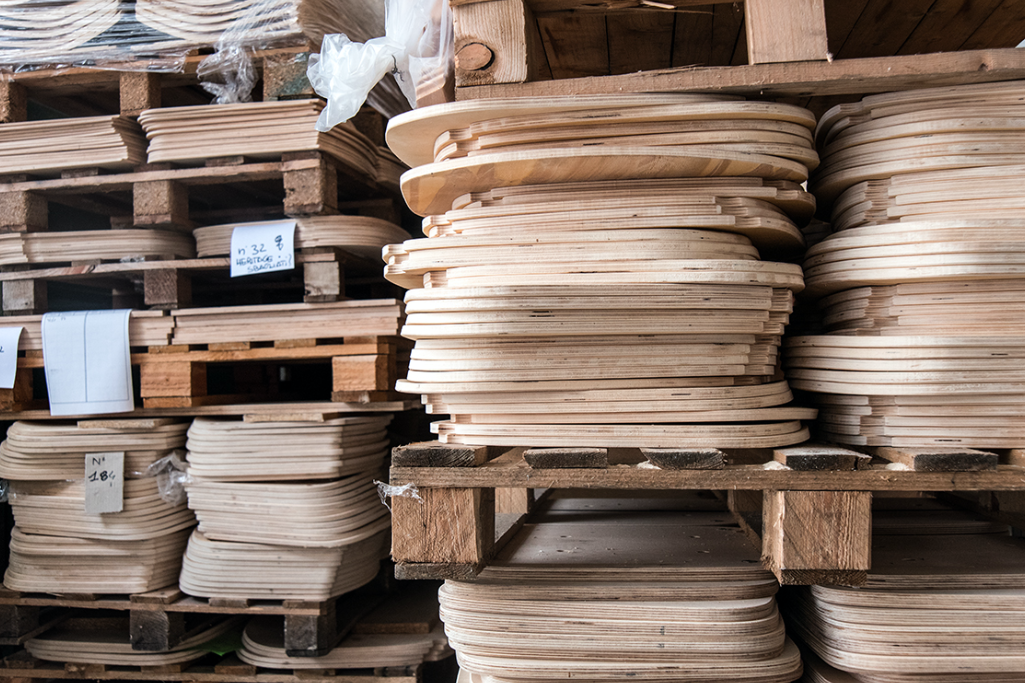 Æ — The title reads # 1. Is the second edition ready? Will other companies be involved?

SZ — The number 1 indicates the desire to always conceive projects with a multi-year perspective, once again with a view to a long-term “sowing”! This number 1 is a hope. A hope to move forward, perhaps with other companies and other sectors….

To build and promote a project, in addition to ideas and synergies, funding is essential, and in the cultural field it’s not always a certainty, especially at this time…

Art and business, a deep theme that can open up a thousand branches and lead to different purposes but which needs a fundamental element, a company interested in investing in creativity and research. Something not to be taken for granted when one enters hybrid territories far from pure design. Your thoughts.

SZ — Also from this point of view, difficulties and uncertainties emerge, above all because in order to invest in creativity and research, companies must first of all believe in cultural values. This is the most complex step. If a company believes in the value of art and culture, then it is willing to invest, perhaps also because the costs of such investments are much lower than an advertising campaign!

A word from Giovanna, who has been committed to promoting the art / business dialogue for many years.

CREAttivo opens up a very topical theme that for some years has involved artistic experimentation and businesses, experimenting with materials. The approach of the visual arts towards areas more usually linked to ‘art and craft’ creates hybrid zones of very interesting experimentation. I have been wondering for a long time how to formalize the concept of “habitable art” for example.

Æ — By always maintaining strong collaborations with companies, do you see in the future of CREAttivo a projection for artistic experimentation towards “habitable” works of art as well as towards product design?

SZ — Of course, the artfully designed environment – a kind of marriage between environmental installation (to use the language of the art system) and the creative planning of habitable interiors – is part of my constant aim to embody the aestheticization of everyday life and the pervasiveness of art. It follows the same thinking that led the CREAttivo project to the production of design prototypes including mosaic work. It is no surprise that they converged on display in a living area that focuses attention on the value of creative projects linking professional studio and home for living. It is the suggestion of “sitting at the table of creativity”. In the future perhaps more ideas may emerge for other rooms for thinking, planning and living! 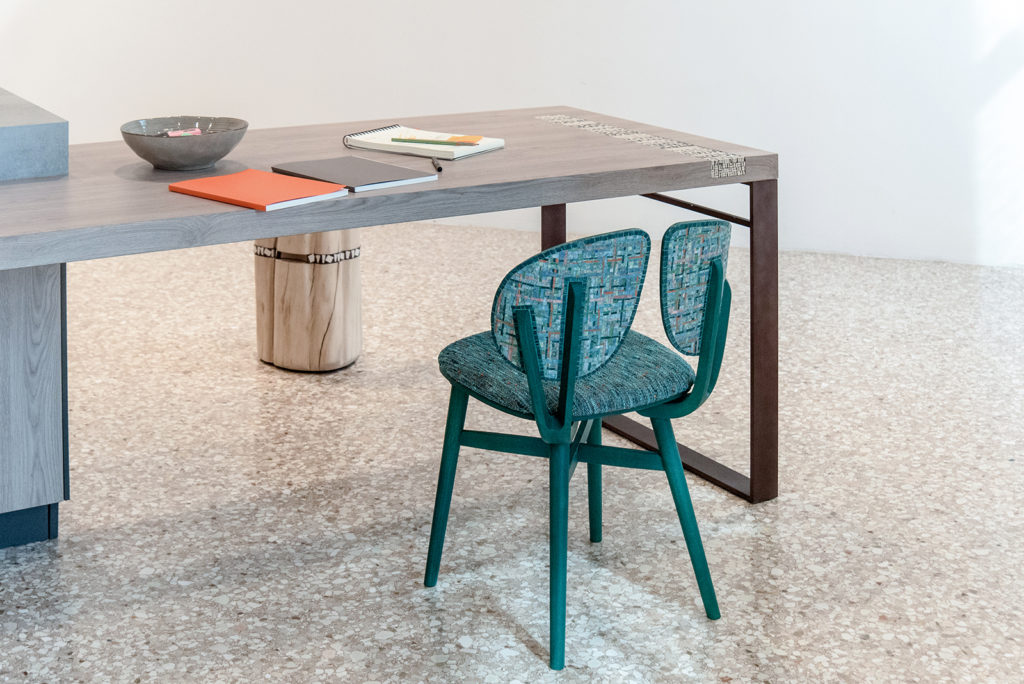 Æ — I find it both beautiful and useful to have combined in the same project training, artistic / technical application and collaboration with big names in design. I imagine that it was a powerful experience for the young artists involved. What did you particularly notice about this process in the field?

SZ — In the first stage of the competition of ideas set up at the Friuli Mosaic School I was already responding to many young artists demanding technical specifications and I sensed a great attention to production requirements, as well as significant respect for the designer’s project. Two aspects that have been successful, as noted by the award-winning projects, related to production and sustainability of the mosaic inserts generated as meta-text to the designer’s creativity; that is, as a further idea that while being characterized by its originality, has been able to enhance the identity of a design object with the mosaic technique without dominating it in an intrusive way. 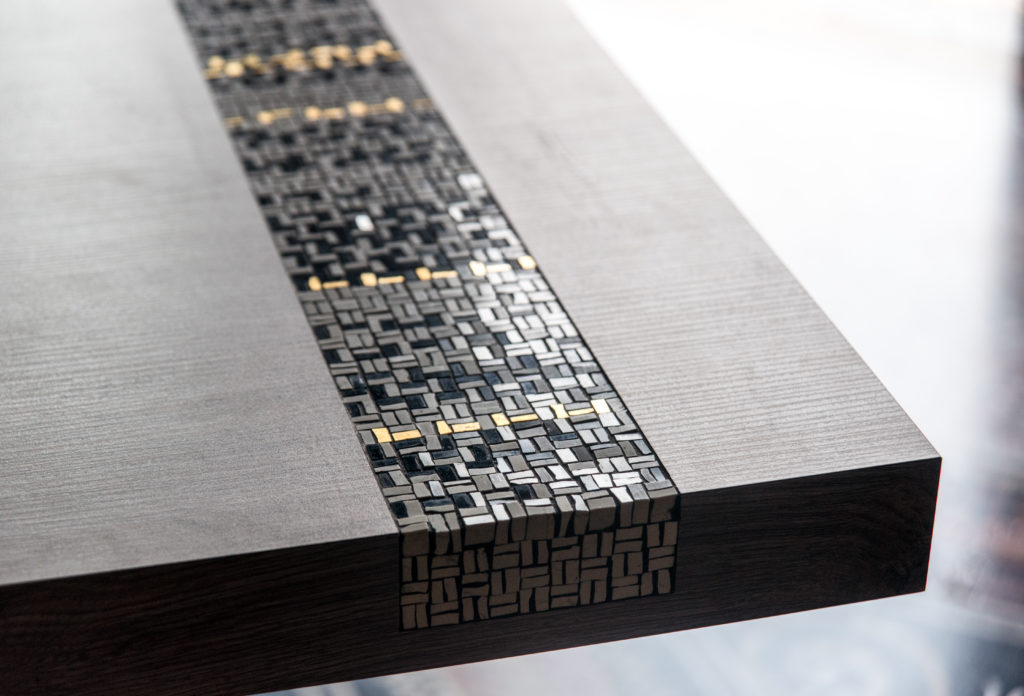 Another significant aspect was that of photographs and videos capturing the different moments of production in the three companies involved and the School at Spilimbergo. The young photographer Valentina Cunja tested herself in two diverse dimensions: the large and medium-sized companies and the classrooms of the school from which the great mosaic masters emerge. This was also a powerful experience and generated images capable of filtering reality with a sharp and creative gaze.

SZ — The power of this experience for young artists was to measure themselves against the thought and planning of great designers by creating a productive dialogue. For the entire project, the most significant aspect turned out to be a dialogue across the sectors, which has been able to intertwine teaching, art and business, merging into actual products and the staging of an exhibition.